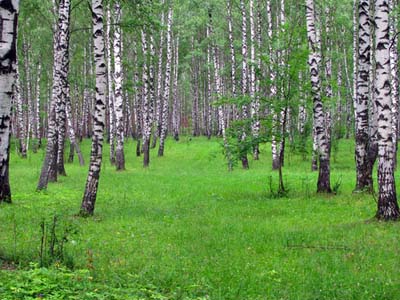 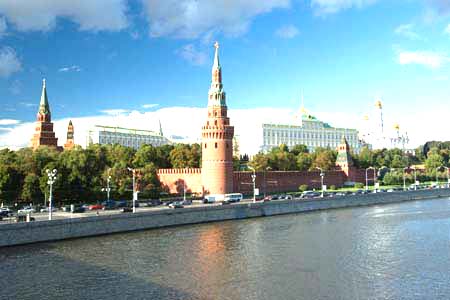 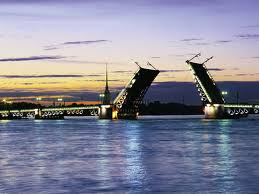 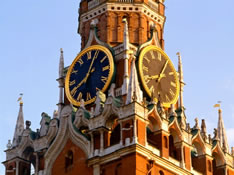 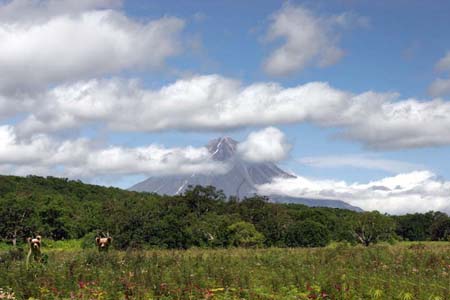 Borders of Russia are 60.9 thousand km length, its 38.8 ths km of them are sea borders. On land, Russia has a border with China, Mongolia (3,400 km), Ukraine, Finlad, Belarus, Azerbaijan (350 km), Georgia and other states. At sea, bordered by Japan, the United States. In the left photograph the famous birch grove, on the right photos the Kamchatka Peninsula.
The capital and heart of Russia is Moscow, witch takes its place among modern megalopolises. The population is approaching 20 million people (according to official sources the population of the capital is more than 12 million. In addition in the city live to 2 million temporary workers, there are always many visitors, and unregistered citizens). The city has hundreds of sights. In a short time to see everything is possible. Moreover, outside the area of attention of tourists, there are other interesting places. 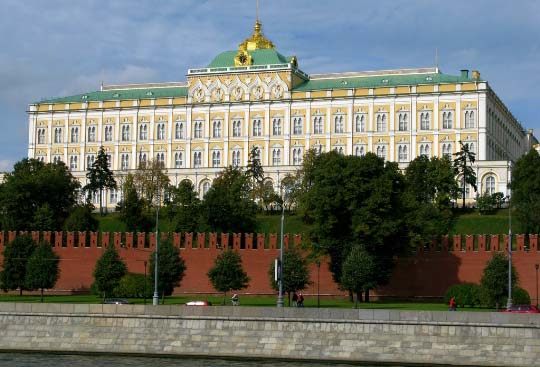 On left photos you can see the Moscow’s center: view of the Kremlin from the Waterfront street (Naberejnaya) and one of the nine towers of Kremlin - Spassky Tower (known clock with a Russian name "Kuranty" (Kremlin chimes clock) are located here). Generally speaking, Moscow in the first place we mean the Kremlin, Red Square and Aleksader garden. The output to here is from one of metro stations "Teatralnaya", 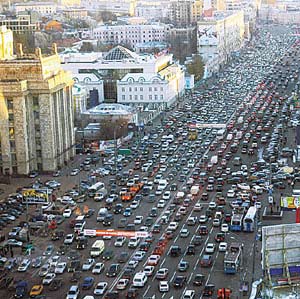 "Okhotny ryad", "Aleksander garden" , "Borovitskaya", "Arbatskaya", "Revolution square" or "Biblioteka" (sentral library). By the way, the city metro is itself the product of creativity and technology (in left pictured you see metro map, which available at each station). The second tower of the Kremlin group is the "Tower of St. Nicholas". 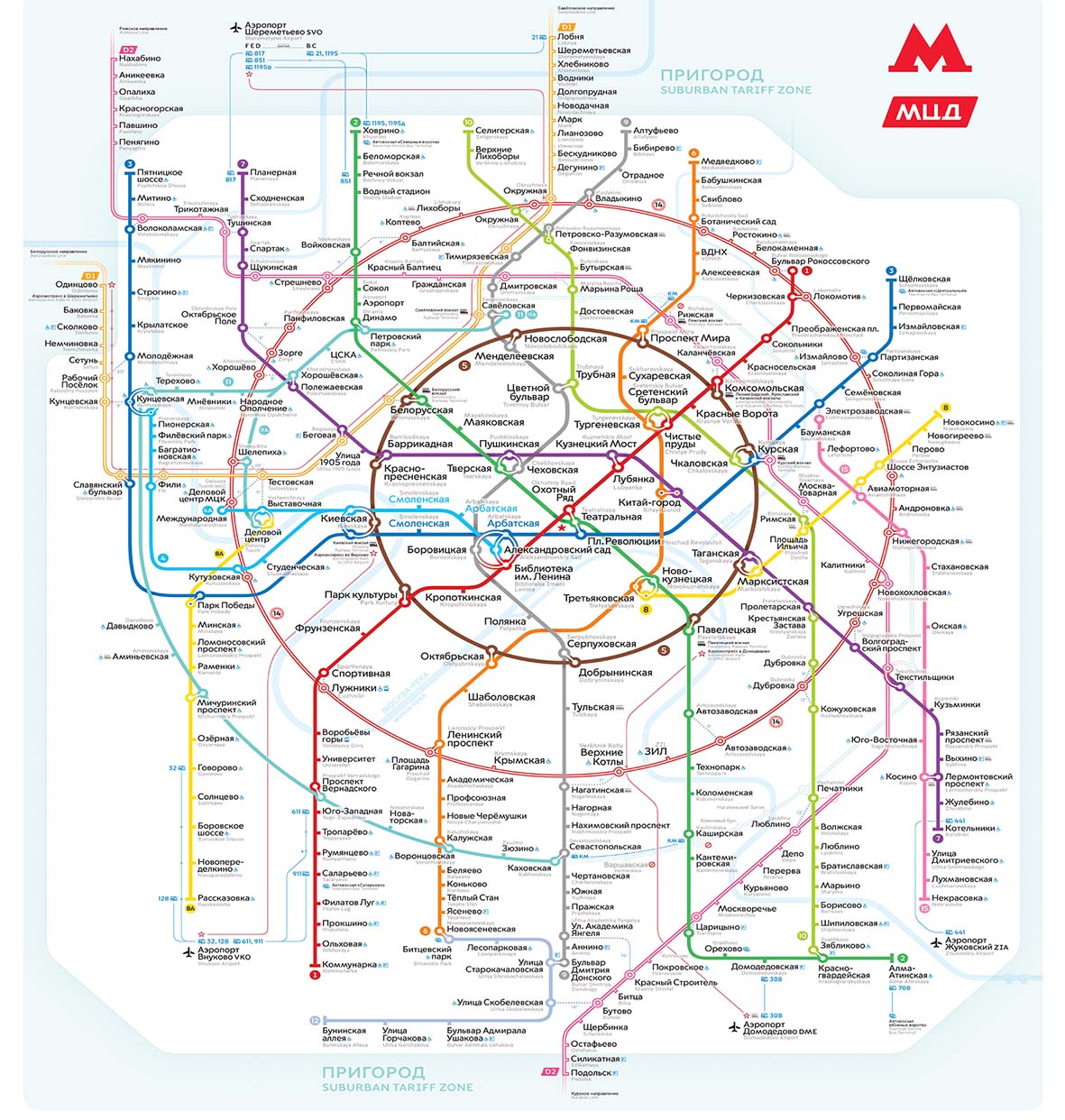 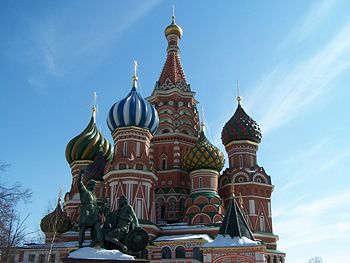 Today, the Kremlin is the seat of the president of Russia, as well as guarded museum. Enter in here is on the cards. In the center of the Kremlin is placed a "Cathedral Square". The largest churchs are Uspenski, Archangel and Blagveschensky cathedrals. Near of them is famous "Granovitsky Palace" and "The Patriarch’s Palace".
The most visited place of this city is Red Square. There You always may see lots of tourists and Muscovites. Therefore, it is always actual translations to different languages :-) On the one hand rests on the Red Square, Kremlin’s entrance gate, beside of Kremlin shines with brilliant St Basil’s Cathedral (see left picture). Opposite the Kremlin is located famous GUM store. Old streets a star go to Red Square, 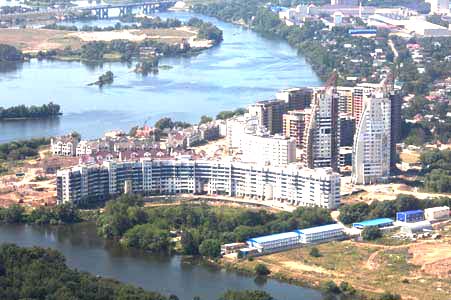 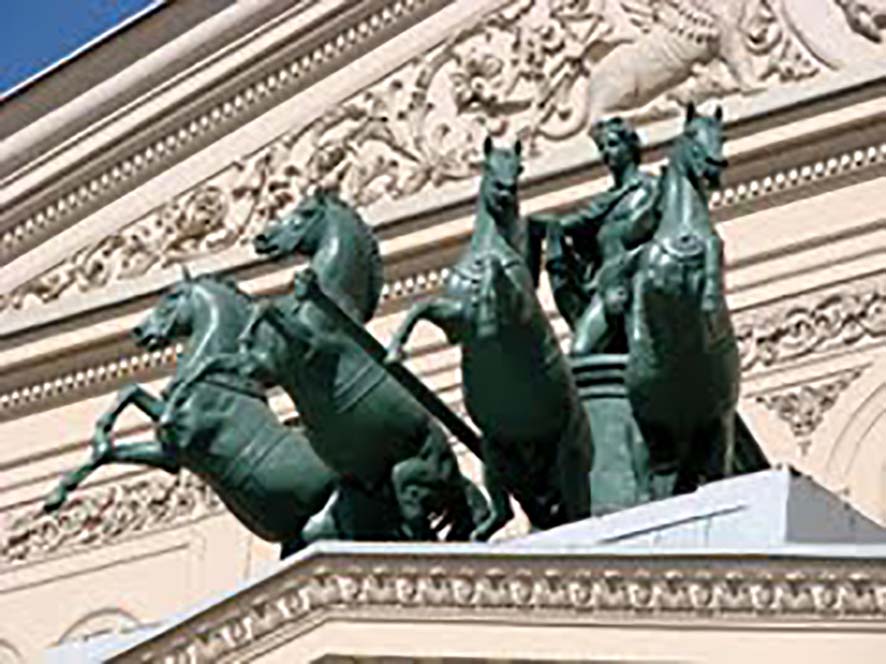 or arc arranged around it. The photo (see right) you can see a fragment of the Bolshoi Theatre. Bolshoi Theatre is located not far from Red Square.
In this place there are many historic buildings in Moscow, and are rapidly building new. Just a short walk from Red Square, located pedestrianized street - Old Arbat Street and parallel to it is one of the most beautiful avenues in Moscow - New Arbat (left photos). 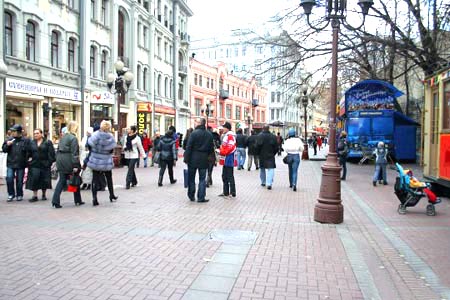 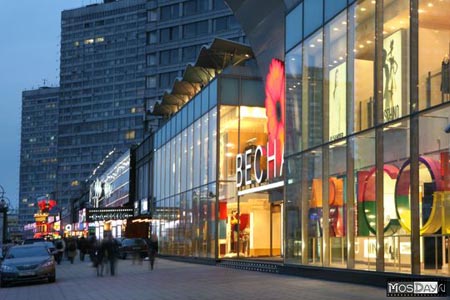 On the way from New Arbat to the Smolensk area you will see one of the most luxurious hotels of the world "Presidential hotel" Generally, Moscow is one of the most expensive cities in the world, perhaps the most expensive. This should be considered when traveling to Moscow.
Night Moscow has a special beauty. The endless concert halls, cinemas, restaurants and cafes, many of whom work 24 hours the magnet pulling tourists. 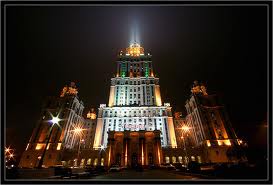 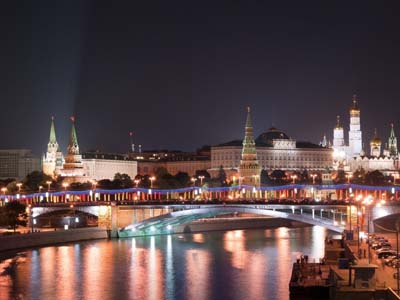 Moscow, though mostly friendly town, all the same please visitors be carefull....

St. Petersburg is the second largest Russian city. St. Petersburg, witch once has been the first one, no accident is called the city of bridges. Indeed St. Petersburg and around there are more than 500 bridges. 68 sources of running water divide a city into 42 islands. 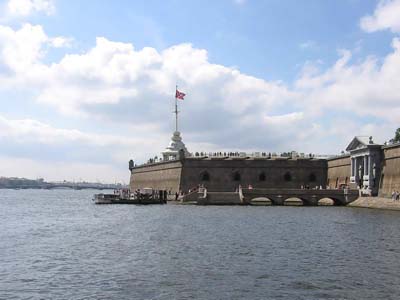 From each island is laid at least one a large or a small bridge. Anichkov bridge crosses the river Fontanka on Nevsky Prospect. The bridge is decorated with sculptures tamed horse, which became a symbol of the city. The bridges named Anichkov, Grenadier, Egyptian, Stone, Obukhov, Blue, Lyons Bridge, Bridge of Kisses, the Theater bridge are known examples of the many bridges. 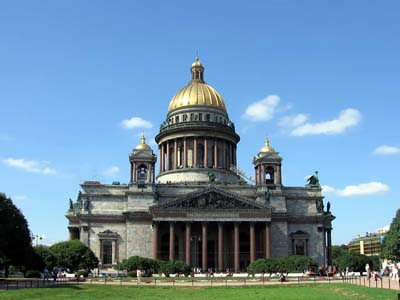 In the spring, usually in April, the traffic on the Neva River is resumes and continues until November 10. During this period, at night, the bridges are raised and they divide the city into three parts: the northern part, the southern part and Vasilevsky Island. Operation modes of bridges is different.

In St. Peterbuge also has many interesting places. The pictures show Peter and Paul Fortress, St. Isaac’s Cathedral and the Palace Square. Another distinctive feature of St. Peterbuge are white nights. They come in the summer. 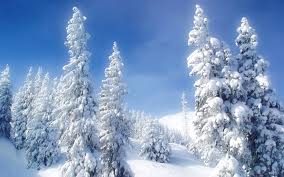 The relief is varied: there are mountains, plains, steppes. Seas - Baltic Sea, Azov and Black Sea.
Although Russia is the largest world country, but the natural conditions do not allow farming. Average temperature fluctuations in summer between 1° and 25° C, in the winter between -6° and -50° C. The deepest lake in the earth Lake of Baikal, the highest European peak Elbrus, the longest river Volga, the largest lake Ladoga and the coldest north point Oymakon hemisphere are in Russia.

On the Internet there is a lot of interesting information about Russia. We will be glad to give you any useful information. And, of course, we may with pleasure perform for you professional translations from Ruusian, Belarussian languages and translations from Azerbaijani, Turkish languages.